When the case against Campbell came to court June 9, 1929, the first day was given over to evidence from two alienists, or psychologists, Drs. Gus Payne and Lawrence Collins, both of whom declared that the defendant, although clearly affected by his morphine addiction, was legally fit to stand trial.

This went to the heart of the trial: for at no point did Campbell attempt to deny that he had first shot and then burnt Mildred—the murder weapon, a. 38 automatic, was recovered from his home—only that he had no recollection of having done so. Prosecutor Abe J. David ridiculed this as nonsense and read aloud a confession made by Campbell shortly after his arrest, in which he admitted killing Mildred to conceal his bigamous marriage. David also offered into evidence 17 letters written by Campbell to the murdered woman. Together, they formed a heartless catalog of deception and manipulation, a clear blueprint of the way in which Campbell traded on Mildred's loneliness and vulnerability to line his own pockets. And, said David, when the hapless Mildred eventually ran Campbell to ground and confronted him about the situation, he had shot her. 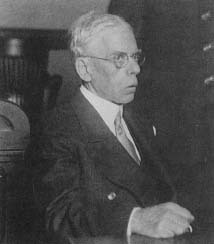 Henry Colin Campbell, at his trial for murdering his bigamous wife.

Guided by defense counsel Francis A. Gordon, Rosalie Campbell, the defendant's genuine wife, fought hard to save her beleaguered husband. In moving terms she described his downward spiral, telling how life had been "wonderful always" at first, but after moving from Chicago to Maryland, "he began to fall. He had headaches and began to lose weight. Then he started taking something for his headaches… He took the medicine not very frequently at first, then more frequently."

During the few months prior to the murder, she said, Campbell's nervousness and irritability appeared to be building toward a peak, and for no apparent reason he had begun carrying a gun.

When Campbell took the stand he looked like a man at the end of his tether. Small and shrunken, with yellow skin and straggly white hair, he trembled visibly behind rimless glasses as Gordon led him through his testimony. After repudiating the confession as a police fabrication, he claimed he had visited Mildred on February 21 in order to return the money she had lent him. First, though, he needed to raise funds, and this meant driving Mildred to several banks, none of which would help him. In between stops, he said, he told Mildred of his secret life. She told him that she did not want him to leave his wife and children. Campbell maintained that throughout the journey he kept dosing himself with drugs to "keep my nerve from going to pieces." Then, he said, everything went blank.

"Do you have any recollection of shooting Mrs. Mowry and burning her body?" asked Gordon.