While Lorraine Was In The Elevators

The testimony—and the newspapers that eagerly reported it—brought out the inherent drama of a situation that had culminated in a crime: The older, gloomy, ill-tempered and dull husband whose idea of fun was staying home and making artistic doodads; the lively, young, party-loving, suburban housewife dutifully sewing slipcovers for the furniture and dresses for little Lorraine; the Mr.-Nice-Guy friend, a Sunday-school teacher, family man, traveling salesman for a corset-and-bra manufacturer, and member of the Orange, New Jersey, Lodge of Elks, who took an interest in Ruth and became her lover; the bribed postmen; the coded letters; the afternoon lovers' trysts at the Waldorf-Astoria, while little Lorraine was dispatched to the fun of riding up and down with the elevator operators. It all added up to the inevitable need, said prosecutor Newcombe, to get rid of Albert Snyder so Ruth Snyder and Gray could be together. But Ruth Snyder's motive was twofold: unbeknown to her husband, she had recently increased his life insurance to $100,000 and she was quietly paying the premiums. 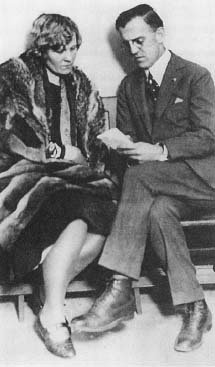 Ruth Snyder and Judd Gray confessed to murdering Snyder's husband and proceeded to shift the blame onto each other during this notorious trial.

Then, too, testimony brought out that Ruth Snyder had tried twice to asphyxiate her husband by disconnecting the gas range, had nearly succeeded in killing him with carbon monoxide by closing the garage door while the car was running inside, had poisoned his whiskey so ineptly that he dumped it out and said he must change bootleggers, and had added narcotics to his medicine when he was ill—all without Albert Snyder suspecting her.

An ironic footnote to the case was that the "J.G." pin had been a keepsake of Albert Snyder's from his long-ago engagement to one Jessie Guischard, who died before they could be married.

Judge Townsend Scudder said a jury's task, amid the conflicting stories of the confessors, was to decide who had done what. The judge reminded the jury that Gray testified Ruth Snyder "arranged the joint plan and jointly participated in the actual killing," while she testified that "Gray was determined to take the life of Albert Snyder and that she endeavored to prevent him from so doing and that she was not present at the time Gray struck the blows … and she testified she believed she had dissuaded the defendant Gray from his alleged evil purpose.…"

Law Library - American Law and Legal InformationNotable Trials and Court Cases - 1918 to 1940Ruth Snyder-Judd Gray Trial: 1927 - "it Don't Look Right", "what About Judd Gray?", While Lorraine Was In The Elevators