"sluice-way For Ninety Percent Of The Corruption"

The Albuquerque Journalbegan an expose in February 1922. By April, its publisher was forced to sell the Journal to a bank controlled by a Harding crony. Soon Senator Robert M. La Follette of Wisconsin, saying Fall's Interior Department was "the sluice-way for ninety percent of the corruption in government," demanded an investigation. Fall resigned. 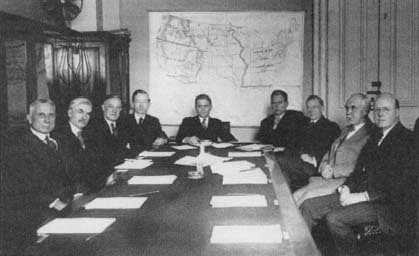 Senate Public Lands Committee, which investigated the activities of the Secretary of the Interior, Albert Fall.

The Senate started hearings in October 1923, soon after President Harding's sudden death. Edward Doheny testified that Fall had not profited by his Navy contracts. But he had "loaned" Fall $100,000. To show for it, however, he could produce only a note from which the signature had been torn. Secretary of the Navy Edwin Denby admitted that the contract with Mammoth Oil was his responsibility and that, having had no part in its preparation, he had not sought the competitive bids required by law. Harry Sinclair, on the stand, stonewalled so the Senate learned nothing more.