The trial, which opened on March 8, 1926, generated lurid public interest. Prosecutor Charles E. Fox declared that although the crux of his case rested on the two confessions made by Marshall, there was plenty of other damning evidence, as well. First, a chauffeur named E. J. Barry described how the defendant had hired him on the night of January 20, to haul away some parcels from his surgery. As Barry lifted one of the packages its paper wrapping broke and out fell a human leg. Barry just gaped. Frantically, Marshall began thrusting fistfuls of dollars at him, begging him to get rid of the parcel, but Barry would have none of it and later approached the police. 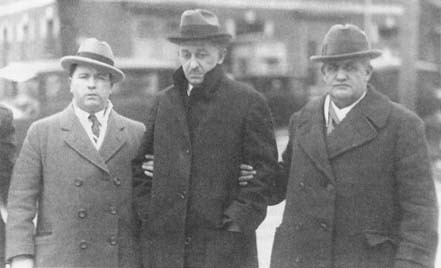 When in custody, Marshall had been hustled off to the morgue by Delaware County District Attorney William Taylor. Testifying for the prosecution, Taylor told how he had assembled everyone around the remains of Anna Dietrich:

I made the others take off their hats, and I turned to Marshall and said: "In the presence of God and this girl's body, didn't you do this?" He smiled at me and put his hand to his mustache and took a cigar out of his pocket and said: "Why, certainly not."

After this, said Taylor, Marshall was returned to the station where he made a statement. Taylor then handed this alleged confession to Fox, who read it aloud to the jury. In it Marshall said: "I cut the body up, but I had nothing to do with her death. She committed suicide. She came into my office and took something—I don't know what it was—and died there."

Listening to this, Marshall squirmed in his chair and had to be prevented by his counsel, Abraham Wernick, from attempting to leave the court.

Worse was to follow. Over heated objections from the defense, Fox was allowed to introduce the second confession, made just hours after the first. In this, Marshall described how Dietrich turned up at his office and tried to blackmail him over their longstanding relationship, demanding money for some items she had just purchased:

I refused, then a quarrel started. I tried to scare her. The result was that, I guess, I choked her… I would like to say this, though … I don't want the impression that I deliberately intended to choke her to death, for I didn't.

Which seemed an odd thing to say, in light of the fact that Marshall's next course of action was to cut Dietrich's throat. The court listened spellbound as his account of dissecting the body—a three-hour task—was read out.

Desperate to impeach this second confession, Wernick attacked the new witness, Assistant District Attorney William B. McClenachan, who had been present at its dictation. Grudgingly, McClenachan admitted that the defendant had appeared "all in" when he signed the confession, having been grilled nonstop for almost 14 hours.

It was important for the prosecution to demonstrate that the victim had been fearful of Marshall, and to this end they produced Kenneth Gleason, a fellow commuter on the train used by Anna Dietrich, who had spoken to the woman on the night of her death. According to Gleason, she had produced a photograph of Marshall, then mentioned that she was attending a party the next night with another man. When Gleason said, "I hope you have a nice time at the party," Dietrich appeared edgy. "I don't know," she said ruefully. "Maybe the man I'm going to meet tonight will object to a date with another man."

Throughout the trial Marshall had remained an oddly peripheral character—so many of his words were read aloud by other people—and it remained that way when he gave testimony. Glib and evasive, he insisted that the second confession had been beaten out of him by overzealous investigators, and he reiterated his claim that Anna had swallowed poison, that he had panicked and cut up the body to conceal his illicit relationship with her.