At that point, Darrow had earned his fee. His job now was to convince the judge that Leopold and Loeb not only did not deserve to be executed but that justice and humanity would be served by reaching a thorough understanding of their peculiar mental states. He introduced psychiatrist witnesses who had found that Richard Loeb was a habitual liar. Since the age of 10, he had fantasized about crimes and imagined himself the "Master Mind" directing others, always outsmarting the world's best detectives; he had cheated at cards, shoplifted, stolen automobiles and liquor, thrown bricks through store windows, and only last November—with Leopold, each carrying loaded revolvers—had burglarized his own fraternity house. "The total lack of appropriate emotional response is one of the most striking features of his present condition," said the Bowman-Hulbert report, noting that Loeb felt no remorse for his actions. "He has gradually projected a world of fantasy over into the world of reality, and at times even confused the two." 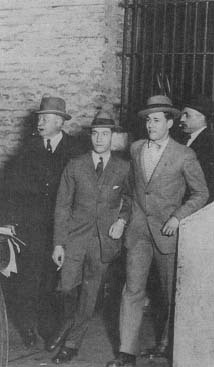 Leopold and Loeb were each sentenced to life for the murder of Bobby Franks and 99 years for his kidnapping.

Reviewing the reports on Leopold, Darrow noted that the young man had been strongly influenced by a governess who encouraged him to steal, so that she could blackmail him, and who "gave him the wrong conception about sex, about theft, about right or wrong, about selfishness, and about secrecy." To Leopold, said Darrow, "selfishness was the ideal life. Each man was a law unto himself."

Nathan Leopold's main fantasy was a king-and-slave relationship. He preferred to be the slave who could save the life of the king, then refuse the reward of freedom. Richard Loeb was his king. He had been in love with Loeb since they were 15 and 14 years old. "I felt myself less than the dust beneath his feet," Leopold had told the psychiatrists. "I'm jealous of the food and drink he takes because I cannot come as close to him as does his food and drink."

As to the kidnapping and murder, said the report, Leopold "got no pleasure from the crime. With him it was an intellectual affair devoid of any emotion. He had no feeling of guilt or remorse."

For a month, as State's Attorney Crowe's psychiatrists insisted that Leopold and Loeb were entirely sane and normal, Darrow pressed his psychiatrist witnesses to testify that the legal sanity of the defendants was undisputed, but that mental instability was not insanity and was not normal.

Finally, for 12 hours Clarence Darrow pleaded for mitigation of punishment. He noted that, while the prosecution charged the murderers with kidnapping Bobby Franks to get money to pay off gambling debts, testimony had proved that both boys had ample money and could get more from their extremely wealthy parents at any time.

Law Library - American Law and Legal InformationNotable Trials and Court Cases - 1918 to 1940Leopold and Loeb Trial: 1924 - The Perfect Murderâ€¦ For Its Thrill, "i Have A Hanging Case", "they Should Be Permanently Isolated From Society"