"a General Lowering Of The Moral Standards"

Meantime, boards of censors, mayors, and film exhibitor associations in countless cities, as well as the states of Missouri, Pennsylvania, and Kansas, banned all Arbuckle movies. The Anti-Saloon League, the Moral Efficiency League, the Women's Vigilant Committee of San Francisco, and club women everywhere agreed. Pastors in pulpits nationwide echoed the words of the minister in Hollywood's Little Church Around the Corner: "The real essence of this Arbuckle matter is a general lowering of the moral standards in this country." 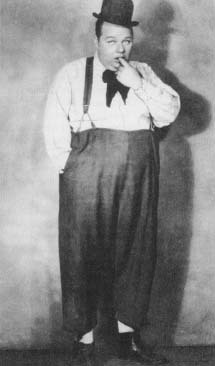 Comedian Fatty Arbuckle's lucrative career was devastated by his involvement in the murder of actress Virginia Rappe.

In this atmosphere the police judge weighing committal for trial concluded:

I do not find any evidence that Mr. Arbuckle either committed or attempted to commit rape. The court has been presented with the merest outline.… The district attorney has presented barely enough facts to justify my holding the defendant on the charge which is here filed against him.

We are trying our present-day morals, our present-day social conditions, our present-day looseness of thought and lack of social balance. The issue here is really and truly larger than the guilt or innocence of this poor, unfortunate man; the issue is universal and grows out of conditions which are a matter of comment and notoriety and apprehension to every true lover and protector of our American institutions.

I have decided to make a holding on the ground of manslaughter.

The first trial produced 60 witnesses, including 18 doctors. Through defense witnesses, lawyer Gavin McNab revealed Virginia Rappe's moral as well as medical history: As a young teenager, she had had five abortions in three years; at 16, she had borne an illegitimate child; since 1907, she had had a series of bladder inflammations and chronic cystitis; she liked to strip naked when she drank; the doctor who attended her in the several days before she died concluded that she had gonorrhea; when she met Arbuckle for the first time on Monday, she was pregnant and that afternoon had asked him to pay for an abortion; on Wednesday, she had asked her nurse to find an abortionist.

On the stand, "Fatty" Arbuckle was simple, direct, unflustered. He related how he had tried to help the ill actress, spending not more then 10 minutes with her before Maude Delmont dismissed him.

Medical testimony proved that Virginia Rappe's bladder was cystitic—one of the causes of rupture of the bladder.