In September 1920, a grand jury began investigating allegations by a professional boxer, William Maharg, that he and former White Sox pitcher Bill Burns had been go-betweens for White Sox players who fixed games for gamblers. Summoned before the grand jury, Cicotte, Felsch, Jackson, and Williams admitted taking bribes for throwing the World Series. Comiskey suspended seven players (in addition to "Chick" Gandil, who was alleged to have made the deal with the gamblers and who was already suspended in a salary dispute).

To fans, the heartbreaker was the accusation against Jackson, who not only batted. 351 in the regular 1919 season but, in the World Series loss, hit for. 375 and achieved a perfect 1.000 fielding average. He had been endeared to fans as "Shoeless Joe" since 1908 when, playing for Greenville, South Carolina, he played one game in his stocking feet when a new pair of spikes gave him blisters. After the confessions, writer Charley Owens of the Chicago Daily News penned a lump-in-the-throat tribute headlined, "Say it ain't so, Joe." The phrase became legend when it was erroneously attributed to a child outside the trial's courthouse.

The suspended players at this point went back on their confessions and now demanded to have their day in court. New indictments were brought, and extradition proceedings failed to round up several named "fixers," including former featherweight boxing champion Abe Attell, former White Sox player Hal Chase, White Sox 1919 utility man "Fred" McMullen, and gamblers Rachel Brown and John J. "Sport" Sullivan.

As the trial opened on July 18, 1921, with Judge Hugo N. Friend presiding, Sox pitcher Bill Burns, who had turned state's evidence, testified that the indicted players had agreed to make the series "a made-to-order one" for famed big-time gambler Arnold Rothstein of New York (who wasn't indicted), Attell, Maharg, and indicted gamblers David Zelser and Carl Zork. Burns quoted Cicotte as saying, "I will throw the first game if I have to throw the ball clear out of the Cincinnati park." 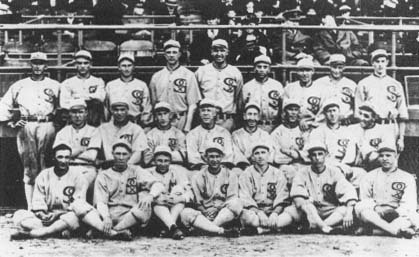 Chicago White Sox baseball team, among them are players involved in the Black Sox Scandal of 1919.

Burns said he met with the players and told them the gamblers would pay $20,000 as they lost each of five games. He also said Jackson was not present when he had talked with the players.