"largely Instrumental In Sending The Circulars About"

As general secretary of the Socialist party, Charles T. Schenck was in charge of the Philadelphia headquarters from which the leaflets were sent.

Schenck was soon arrested and indicted for sedition in conspiring to cause insubordination in the armed forces and obstruction of recruitment and enlistment. No evidence was presented to prove that he had corrupted even one draftee. Rather, the publication of the pamphlets was itself considered proof enough of his guilt. 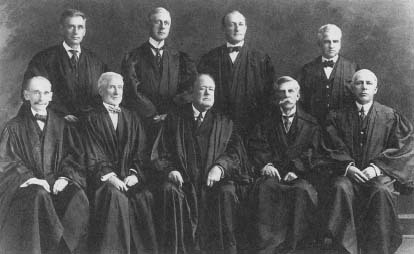 In this significant First Amendment case, the 1919 Court unanimously affirmed that Schenck was guilty of violating the Espionage Act of 1917.

The defense presented a simple argument: Schenck had exercised the right guaranteed him by the First Amendment—the right to speak freely on a public issue.

Found guilty, Schenck appealed through the district courts and to the Supreme Court, steadfastly insisting on his right to freedom of speech.

Schenck's defense argued that there was not enough evidence to prove that he himself was concerned with sending out the pamphlets. Reviewing the testimony, Holmes pointed out that Schenck was the general secretary of the Socialist Party and was in charge of the headquarters from which the pamphlets were sent to men who had been called and accepted for military service. The general secretary's report of August 20, 1917, Holmes noted, said, "Obtained new leaflets from printer and started work addressing envelopes." Holmes also pointed out that "there was a resolve that Comrade Schenck be allowed $125 for sending leaflets through the mail."

"No reasonable man," concluded Holmes, "could doubt that the defendant Schenck was largely instrumental in sending the circulars about."

Justice Holmes wrote the opinion that was shared unanimously by the court. Noting that no case had been made for the leaflets having actually caused any insurrection, he commented:

Of course the document would not have been sent unless it had been intended to have some effect, and we do not see what effect it could be expected to have upon persons subject to the draft except to influence them to obstruct the carrying of it out.

Holmes agreed with the defense that the leaflets were entitled to First Amendment protection, but only in peacetime—not in wartime.

We admit that in many places and in ordinary times the defendants in saying all that was said in the circular would have been within their constitutional rights. But the character of every act depends upon the circumstances in which it is done. The most stringent protection of free speech would not protect a man in falsely shouting fire in a theater and causing a panic.

It may be noted in passing that Holmes never said the theater was crowded; posterity has consistently and mistakenly ascribed that adjective to the quotation. Next came the justice's second memorable phrase:

The question in every case is whether the words used are used in such circumstances and are of such a nature as to create a clear and present danger that they will bring about the substantive evils that Congress has a right to prevent.

The "clear and present danger," said Holmes, is a question of "proximity and degree."

When a nation is at war many things that might be said in time of peace are such a hindrance to its effort that their utterance will not be endured so long as men fight and that no court could regard them as protected by any constitutional right.

Finally, the justice observed, it made no difference that Schenck and his compatriots had failed to obstruct recruitment. "The statute," he said, "punishes conspiracies to obstruct as well as actual obstruction."

If the act [speaking or circulating a paper], its tendency and the intent with which it is done are the same, we perceive no ground for saying that success alone warrants making the act a crime.

With that, the judgments of the lower courts were affirmed. Charles T. Schenck, who had been sentenced to 10 years' imprisonment on each of the three counts of the indictment, but with the three terms to be served concurrently, was sent to federal prison.

The Schenck case, in establishing the "clear and present danger" criterion, marked a turning point in First Amendment thinking by the court. Until then, Chief Justice Edward White and other judges had permitted the government to suppress any speech that displayed a "dangerous tendency." Within months, moreover, Holmes refined his views on the First Amendment when seven of his colleagues found a "clear and present danger" in the Abrams v. United States case. A Russian-born American named Jacob Abrams had been found guilty of violating the Espionage Act when he scattered leaflets protesting the sending of American troops into Russia after the Revolution of 1917. Holmes' dissent objected that Abrams had been condemned not for what he did but for what he believed. The justice insisted that the First Amendment guaranteed one's right to freedom of opinion, if not (as in the Schenck case during wartime) of action. One may assume that Holmes would have continued to insist on the guarantee of this right during the dark days of McCarthyism and the House Un-American Activities Committee.

In 1927, Holmes again dissented when the court upheld the conviction of Socialist Benjamin Gitlow under a New York state law for advocating criminal anarchy. Holmes found that Gitlow's publications, which advocated overthrowing the government, were protected by the Fourteenth Amendment's due process clause against interference by the state. The justice saw "no present danger of an attempt to overthrow the Government by force" in Gitlow's papers.