The Trials of Alice Paul and Other National Woman's Party Members: 1917

SIGNIFICANCE: In 1917 and 1918, almost 500 suffragists were arrested during their picketing of the White House; 168, including National Woman's Party Chairperson Alice Paul, were tried, convicted, and imprisoned for terms of up to seven months, ostensibly for blocking traffic on a sidewalk. The women believed they were actually imprisoned for their political beliefs and became the first U.S. citizens to claim that their government held them as political prisoners.

Women first organized to demand suffrage in 1848, at what became known as the Seneca Falls Convention. In 1917, despite 69 years of active campaigning, women were still without the vote. Members of Alice Paul's National Woman's Party decided to try a new tactic, and on January 10 they began picketing President Woodrow Wilson and the White House.

Prior to the United States' entrance into World War I, the women received no attention from the government. Shortly after the declaration of war, however, Alice Paul was warned by the chief of police for the District of Columbia that picketers would now have to be arrested. Paul replied that her lawyers had "assured us all along that picketing was legal," and she maintained that it was "certainly. … as legal in June as in January." The first two picketers were nonetheless arrested on June 22, 1917. They were charged with obstructing a sidewalk but released and never tried, as were 27 other women within the next four days. This process failed to put an end to the picketing, and on June 27 six women stood trial for obstructing traffic. They were found guilty and fined $25.00. Because they refused to pay their fine, they were sentenced to three days in jail.

Mullowney had earlier consulted the U.S. Attorney about the possibility of trying the women under the Espionage Act of 1917. Passed in June, it outlawed, 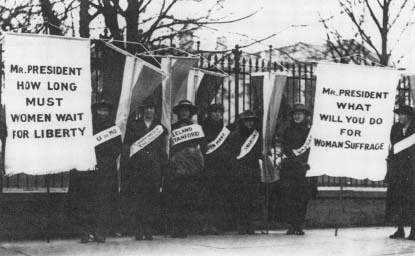 Alice Paul and Lucy Burns picketing the White House with others for the National Woman's Party. among other things, the making of untrue statements which interfered with the conduct of war. The women's banners, Mullowney said, contained "words … [that] are treasonous and seditious." As it turned out, however, the women's banners contained what they considered ironic quotations of President Wilson's own speeches, such as a line from his War Message Speech of April 2: "WE SHALL FIGHT FOR THE THINGS WHICH WE HAVE ALWAYS HELD NEAREST OUR HEARTS—FOR DEMOCRACY, FOR THE RIGHT OF THOSE WHO SUBMIT TO AUTHORITY TO HAVE A VOICE IN THEIR OWN GOVERNMENTS." Since the president's own words could not feasibly be brought up under the Espionage Act, and because—as Paul had earlier insisted—picketing was perfectly legal in the United States, the women were charged with the by-now expected "crime" of obstructing traffic. All 16 women were sentenced to 60 days in the Occoquan Workhouse.

A Wilson appointee and friend, Dudley Field Malone, collector of the Port of New York, happened to witness the women's trial. Outraged at its conclusion, he took a taxi to the White House and gave Wilson his resignation, stating that he planned to offer his legal services to the suffragists. Wilson refused to accept Malone's resignation. On July 20, the President pardoned all the suffragists imprisoned at Occoquan.

Picketing continued unabated, and arrests resumed in August. Dudley Field Malone offered his resignation again on September 7, this time forwarding copies of his letter to all the leading newspapers as well as to President Wilson, writing, "I think it is high time that men in this generation, at some cost to themselves, stood up to battle for the national enfranchisement of American women." This time, Malone's resignation was accepted.

On October 4, Alice Paul herself was arrested along with 10 other women. In court October 8, the women refused to be sworn or to recognize the legitimacy of the court. Paul said: "We do not consider ourselves subject to this Court since, as an unenfranchised class, we have nothing to do with the making of the laws which have put us in this position." Although the charge was not dismissed, the women were released without sentence.

Alice Paul was arrested again on October 20, this time in the company of Dr. Caroline Spencer, Gladys Greiner, and Gertrude Crocker. The four were tried on October 22 before Judge Mullowney.

Police Sergeant Lee testified: "I made my way through the crowd that was surrounding them, and told the ladies they were violating the law by standing at the gates, and would not they please move on."

When Assistant District Attorney Hart asked Lee about the women's response, he replied: "They did not [move on], and they did not answer either … [I] placed them under arrest."

Paul and Spencer, who had been carrying banners, were sentenced to seven months imprisonment. Greiner and Crocker, given the choice between $5.00 fines or 30 days imprisonment, elected to go to jail.

Lucy Burns, one of the first women arrested and released on June 22, had been arrested again in September and convicted; in Occoquan Workhouse before Paul's imprisonment, Burns organized the other incarcerated suffragists to request political prisoner status. Their petition was smuggled to the commissioners of the District of Columbia. Each of the signers was immediately placed in solitary confinement. At the end of October, Paul arrived at Occoquan with the recently sentenced Rose Winslow, and the two announced a hunger strike to "secure for [their] fellow comrades treatment accorded political prisoners in every civilized country but our own."

Paul, Winslow, and others who joined the hunger strike were force-fed. Paul was held in solitary confinement and then transferred to a psychiatric hospital, where her windows were boarded over. Dudley Field Malone, finally managed to have her released to a regular hospital on a writ of habeas corpus.

On November 27 and 28, 1917, all of the imprisoned suffragists were released without condition or explanation. On March 4, 1918, the District of Columbia Court of Appeals ruled on an appeal filed earlier by Malone. Each one of the suffragists had been "illegally arrested, illegally convicted, and illegally imprisoned."

The Nineteenth Amendment, enfranchising women, was adopted on August 26, 1920.