On December 27, 1911, the jury announced its verdict. It pronounced Blanck and Harris not guilty. Although the prosecution's evidence was compelling,, it was not enough to overcome the judge's instructions. As one juror stated:

With the support of District Attorney Charles S. Whitman, the prosecutors moved for another trial. Judge Samuel Seabury presided over the retrial. Despite public outrage against the first trial's acquittal, on March 12, 1912, Judge Seabury ordered the retrial dismissed on the grounds that the defendants were being tried for the same offense. Based upon the principle of double jeopardy, Judge Seabury proclaimed: 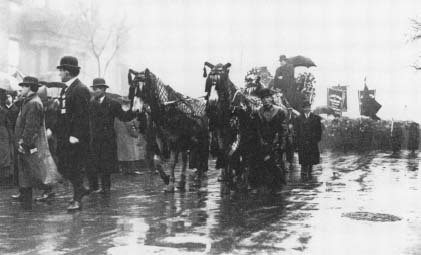 A union march in memory of the victims of the Triangle Shirtwaist fire.

The court has neither the right nor the power to proceed with the present trial. These men are to be tried for the same offense again and under our constitution and laws, this cannot be done. I charge you, gentlemen of the jury, to find a verdict for the defendants.

Blanck and Harris left the courtroom free men. The impact of the Triangle fire, however, was not lost. New York City soon had a Bureau of Fire Prevention, which implemented stricter safety regulations and saw to their enforcement. Other cities and states followed suit in the years and decades to come. The federal government finally acted to ensure workplace safety during the administration of Franklin D. Roosevelt, and FDR's measures were the predecessor to such protective agencies as the Occupational Safety and Health Administration. Today, there are extensive federal and state safety regulations to protect workers from the sort of dangers that resulted in the Triangle fire.