Only Van Schaick Is Tried

On June 20, 1904, the inquest began. There were eight days of testimony by Captain Van Schaick, the crew of the General Slocum, surviving passengers and officers and directors of the Knickerbocker Steamboat Company. Although it was Captain Van Schaick's duty to run the ship, the company should have paid for the necessary repairs to, and upkeep of, the safety equipment. Company President Frank A. Barnaby denied that the condition of the General Slocum had been allowed to deteriorate, but the receipts for repairs that Barnaby presented were highly suspect. 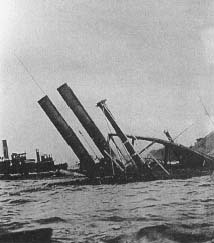 A dramatic photograph of the General Slocum sinking. (Harper's Weekly)

Questions: You know of your own knowledge that these bills are for Slocum apparatus?

Question: You are sure all these were for the General Slocum?

Question: If this is the case, how is it I find in some of these bills the name Grand Republic [another company steamboat] scratched out or taken out with acid and the name Slocum inserted?

Barnaby: I suppose some bookkeeper must have done that.

On June 28, 1904, the coroner's inquest jury found Captain Van Schaick and the officers and directors of the company guilty of manslaughter in the form of criminal negligence for not having fulfilled their collective duty to see that the ship had the proper safety equipment. Only Captain Van Schaick, however, was brought to trial.

The trial began on January 10, 1906, before Judge Edward B. Thomas. Captain Van Schaick was defended by Terence J. McManus and William M.K. Olcott. The prosecutors were Ernest E. Baldwin and U.S. District Attorney Henry I. Burnett. On January 27, 1906, the jury found Van Schaick guilty of the charges of criminal negligence and misconduct. Thomas told Captain Van Schaick, "You are no ordinary criminal; I must make an example of you," and sentenced him to the maximum penalty under the law, 10 years in prison.

On February 12, 1908, Captain Van Schaick's appeal was denied. He went to New York's infamous Sing Sing prison to serve his sentence, not a pleasant prospect for a man over 70 years old. His wife, Grace Mary Van Schaick, worked for his release and got over 200,000 signatures on a petition for his pardon. President Theodore Roosevelt twice refused to pardon Captain Van Schaick, but the next president, William Howard Taft, was more receptive. On Christmas Day of 1911, Taft pardoned Captain Van Schaick, who had already served nearly four years of his sentence. After leaving Sing Sing, he retired to live on a farm in Fulton County, New York until he died at the age of 90 on December 8, 1927.

Captain Van Schaick may have been partially responsible for the General Slocum disaster, but there was surely no justice in letting the company, its officers and directors escape punishment for their misconduct as well. The Captain Van Schaick trial and other trials, such as the one following the Triangle Shirtwaist fire (see separate entry), illustrate the extreme reluctance that the legal system had in that period in recognizing that corporations should be held accountable for their actions.