Eugene Debs was born in 1855 to a blue-collar Midwestern family. He began his career as a lowly railroad worker. However, he soon discovered that his real gift was in politics, and he rose quickly in the budding union movement. By 1893 Debs was president of the American Railway Union. Although the ARU was primarily a railroad-track workers union, in the spring of 1894 many Pullman employees joined. On May 11, 1894, the smoldering discontent in Pullman ignited and all 3,300 workers went on strike. Although it is likely that the strike was a spontaneous local event not called by the ARU, Debs quickly went to Pullman and assumed leadership of the strike. Because the ARU represented workers in nearly every railroad system in the United States, and the railroads threw their support behind Pullman, the strike soon became a nationwide railway work stoppage. The resulting paralysis of the American rail network was dubbed the "Debs Rebellion." 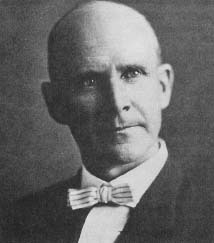 Eugene Debs, leader of the strikers from the American Railway Union, (Courtesy, Library of Congress)

President Grover Cleveland was alarmed by the strike and sided with Pullman and the railroads. His attorney general, Richard Olney, went to federal judges Peter Grosscup and William A. Woods to ask for a court order stopping the strike. Ironically, one of Olney's arguments in asking for the injunction was that the ARU strike violated the Sherman Antitrust Act of 1890. The Sherman Act was intended to break up large corporate monopolies and gave federal judges broad powers to issue orders stopping actions they deemed harmful to interstate commerce. At Olney's suggestion, Grosscup and Woods twisted the act's meaning and on July 2, 1894 used their power to order Debs and the other ARU leaders to abandon the strike. The order even made answering a telegram from the strikers a violation of the terms of the injunction.

Furious, Debs and the ARU leadership resolved to ignore the injunction. Because violating a court order constitutes contempt of court, Judge Woods had Debs hauled into court and sentenced him to six months in jail. Contempt of court is the traditional means by which judges enforce their authority, requiring no trial or jury. The government also charged Debs with conspiracy to block the federal mail: the ARU's nationwide railroad work stoppage had halted a Rock Island Railroad train carrying mail for the post office. In the meantime, the federal government's actions were not limited to the legal system. President Cleveland sent federal troops to Chicago to crush the strike.