Once Garfield was dead, the government could finally try Charles Guiteau for murder. The trial opened November 14, 1881, in the District of Columbia. The judge was Walter Cox. Guiteau's lawyers were Leigh Robinson and George Scoville, although Guiteau would insist on trying to represent himself during the trial. U.S. Attorney General Wayne MacVeagh, determined to secure a conviction, named five lawyers to the prosecution team: George Corkhill, Walter Davidge, John K. Porter, Elihu Root, and E.B. Smith. Corkhill, who was also the District of Columbia's district attorney, summed up the prosecution's opinion of Guiteau's insanity defense in a pre-trial press statement that also mirrored public opinion on the issue:

He's no more insane than I am.… There's nothing of the madman about Guiteau: he's a cool calculating blackguard, a polished ruffian, who has gradually prepared himself to pose in this way before the world … he was a dead-beat, pure and simple.… Finally he got tired of the monotony of dead-beating. He wanted excitement of some other kind and notoriety, and he's got it.

Unfortunately for his attorneys, Guiteau not only fought their attempt to assert an insanity defense, but insisted on asserting some bizarre legal defenses of his own. For example, he wrote a plea to Judge Cox arguing that the cause of Garfield's death was the doctors' failure to properly treat the bullet wound and therefore Guiteau was not guilty of murder. Of course, Guiteau's argument had no legal support. Any chance of acquitting Guiteau rested with his attorneys' efforts to prove that he was insane. 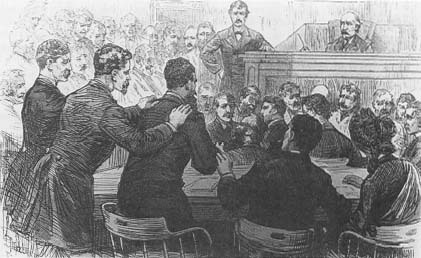 An angry Guiteau being restrained during his sensational trial for the killing of President Garfield.

There is still some debate over what constitutes legal insanity, but most authorities generally agree that the basic test is whether the defendant knew that his actions were wrong. At the time of the Guiteau trial, however, the prevailing test of legal insanity was whether defendant knew that his actions were criminal. Therefore, even though someone like Guiteau might be considered insane because he didn't think it was wrong to shoot the president, he could be convicted if the judge determined that he understood that the law made it illegal to shoot people. By the 1880s, courts were beginning to apply the less harsh "was it wrong" test, which also gave the jury rather than the judge the task of determining insanity.

Influenced by this trend in the law, Judge Cox allowed both sides to argue their case directly to the jury, and intervened only occasionally. Despite strong evidence of his insanity, Guiteau insisted he was sane, so his attorneys simply let him ramble on and hoped that the jury drew the right conclusion. For example, they let Guiteau explain that he shot Garfield not only out of revenge, but also because God had told him that Garfield was ruining the Republican Party and must be killed to save the country from the Democrats. Guiteau testified that God had promised to protect him if he shot Garfield:

I want to say right here in reference to protection, that the Deity himself will protect me; that He has used all these soldiers, and these experts, and this honorable court, and these counsel, to serve Him and protect me. That is my theory about protection. The Lord is no fool, and when He has got anything to do He uses the best means He can to carry out His purposes.

Judge Cox and the prosecutors agreed that Guiteau's sanity or insanity had to be measured by whether he knew his actions were wrong, but they were also determined not to let Guiteau escape the hangman. Cox instructed the jury that any minimal amount of understanding on Guiteau's part would be enough to support a guilty verdict:

When you come … to consider … such a crime as we have here, murder most foul and unnatural, the law requires a very slight degree of intelligence indeed.

The way was thus paved for the prosecutors, led by Davidge, to make an emotional appeal to the jurors in their closing argument for Guiteau's conviction:

A man may not have intelligence enough to be made responsible, even for a less crime; but it is hard, it is very hard to conceive of the individual with any degree of intelligence at all, incapable of comprehending that the head of a great constitutional republic is not to be shot down like a dog.

The defense was paralysed, and their efforts to portray Guiteau as not guilty by reason of insanity were brushed aside. Davidge asserted that Guiteau's erratic behavior could be explained by his overweening ego:

Such is the indescribable egotism of this man that he put himself on the same plane as the Savior of mankind and the prophets. There you have the explanation of his applying for the mission at Paris. For this man, in his indescribable egotism, seems to have thought all along that there was nothing in the world too high for him.

On January 13, 1882, the jury rendered its verdict. They found Charles Guiteau guilty of the murder of President Garfield. Guiteau leaped to his feet and screamed at the jurors, "You are all low, consummate jackasses." Guards took Guiteau back to his cell to await execution. On June 30, 1882, Guiteau went to the scaffold, ranting about the Almighty as he went to his death at the end of a rope. Guiteau had been given the benefit of a new and more liberal legal definition of insanity, but like many criminal defendants to come, he found out that public opinion influences judges and juries alike.

Ogilvie, John Stuart. The Life and Death of James A. Garfield From the Tow Path to the W1'hite House.Cincinnati, Ohio: Cincinnati Publishing Co., 1881.

Rosenberg, Charles E. The Trial of the Assassin Guiteau: Psychiatry and Law in the Gilded Age. Chicago:University of Chicago Press, 1968.