Although the House of Representatives had adopted the resolution to impeach Johnson, Article I, Section 3 of the Constitution mandates that the Senate must conduct the impeachment trial. This provision further states that at least two-thirds of the Senate must vote in favor of impeachment and, because a presidential impeachment was at issue, that Chief Justice Salmon P. Chase of the Supreme Court must preside.

Therefore, the House appointed seven congressmen as "trial managers," or prosecutors for the impeachment. These congressmen were John A. Bingham, George Boutwell, Benjamin F. Butler, John A. Logan, Thaddeus Stevens, Thomas Williams and James F. Wilson. Although Stevens had been the House leader, illness forced him to relinquish most of his authority to Benjamin Butler. 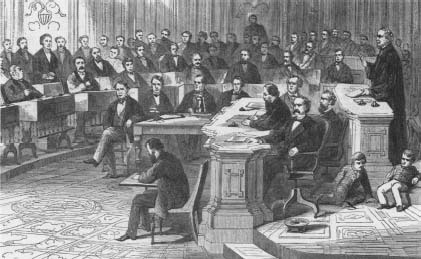 Butler was a colorful character. A general in the Union army during the Civil War, he was the military governor of New Orleans after the city was taken. During his governorship, he tolerated no pro-Southern dissent. One day when Butler perceived that he had been slighted by a group of New Orleans women, he issued an order that any woman showing "contempt for a United States officer" should be considered a "woman of the town plying her avocation" and thus implicitly subject to prosecution for prostitution. After the war, Butler returned to Massachusetts and was elected to the House. Butler lost no time in launching the House's case against Johnson. From the beginning, however, it was clear that the proceedings would be dominated by the political struggle between Johnson and Butler. Legal niceties were secondary.

Under Butler's direction, the trial managers presented the House's articles of impeachment. These eleven articles consisted of various nonspecific charges of "high crimes and misdemeanors" against Johnson. For example, Johnson was accused of making "intemperate, inflammatory, and scandalous harangues" against Congress during the Swing Around the Circle. Johnson's response to these vague charges was quick and furious:

Impeach me for violating the Constitution! Damn them! I have been struggling and working ever since I have been in this chair to uphold the Constitution they trample underfoot! I don't care what becomes of me, but I'll fight them until they rot! I shall not allow the Constitution of the United States to be destroyed by evil men who are trying to ruin this government and this nation!

The trial began March 30, 1868. After some initial confusion, the trial managers decided to pursue a two-pronged attack. They would attempt to prove that Johnson's opposition to the Tenure of Office Act was unconstitutional and that Johnson had flagrantly abused his office with his comments about Congress. The testimony of witnesses the trial managers produced was not limited to these issues, however. There was testimony on practically any matter that could serve to discredit Johnson, such as Johnson's alleged excessive drinking habits.

Johnson's defense rested with William Maxwell Evarts, a New York attorney highly regarded throughout the North, and Benjamin R. Curtis, a former Supreme Court justice. Other lawyers, such as former Attorney General Henry Stanbery, assisted with the defense. All of Johnson's counsel felt strongly enough about the importance of the case that they worked free of charge.