Toward the end of the Civil War, General William T. Sherman launched his famous March to the Sea through Georgia. Sherman's troops stripped the land of food and destroyed every plantation, railroad track, and other things of military importance in their path. As they cut a swath 60 miles wide through the heart of the crumbling Confederacy, Sherman's troops encountered some men, nearly starved to death and in tattered clothing, who claimed that they had escaped from a Confederate prison camp at Andersonville, Georgia, where thousands more like them were still captive. When Union troops took Andersonville, they found these reports were true.

Like the Allied troops in 1945 advancing deep into the Nazi heartland and coming upon Auschwitz or Treblinka decades later, Union soldiers saw how in modern warfare a civilized country could treat its enemies with barbarism. In the middle of some of the South's richest farm land, Union prisoners starved to death. Captain Henry Wirz kept them under heavy guard on a small patch of land, through which a little creek flowed and provided the only source of drinking water and sanitation. The creek was soon fouled with excrement, causing disease to spread like wildfire among the prisoners penned up in Andersonville. Wirz did nothing to ensure that adequate food, clothing, or medical care reached the men under his care.

In his Andersonville diary, John Ransom wrote that in particularly bad months, one-third to one-half of the prisoners in Andersonville died from the terrible conditions there. Although these tragedies were taking place every month, Andersonville's population continued to swell due to fresh battles and Confederate captures of Union troops. For example, in August 1864, there were nearly 40,000 men in Andersonville, which was designed to hold only 10,000. 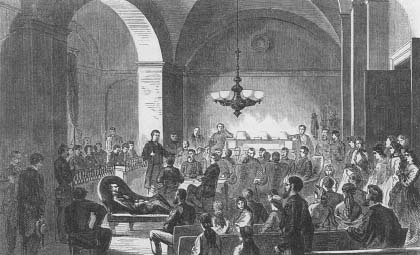 Captain Wirz, reclining, the only person tried by the Union for war crimes following the Civil War.

After Union troops arrived, the liberated prisoners spoke of atrocities Wirz personally committed. According to the prisoners, Wirz had on several occasions shot, tortured, and otherwise mistreated Union prisoners for no reason.