Containing such opposition was a major concern of Abraham Lincoln's administration. Particularly as the war dragged on, month after month, and the Union forces experienced defeat after defeat, the fiery words of Vallandigham came to seem ever more dangerous to those Union leaders charged with pursuing the war. One such was Major General Ambrose E. Burnside, who after his terrible defeat at Fredericksburg, Virginia, in December 1862, was assigned to be Commander of the Department of the Ohio. Infuriated by the antiwar sentiments expressed by Vallandigham and others like him, on April 13, 1863, entirely on his own, Burnside issued "General Orders, No. 38," which stated that the "habit of declaring sympathy for the enemy" would not be tolerated, and that those "committing such offenses" would be arrested and subject to military procedures, not civil courts. This simply served to incite Vallandigham to speak out still more strongly, and on May 1, while addressing a rally in Mount Vernon, Ohio, he deliberately taunted Burnside and said that his right to criticize was based on "'General Orders No. 1'—the Constitution of the United States, signed by General George Washington." 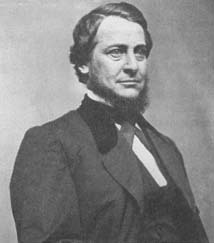 Clement L. Vallandigham, a civilian court-martialed by a military court.

When Burnside was informed of Vallandigham's provocative speech, he sent a company of soldiers to arrest him at his home in Dayton, Ohio. Brought by train to Cincinnati in the early hours of May 5, Vallandigham was at first detained in an army barracks, but later in the morning was moved to a suite in the finest hotel in Cincinnati. Controversy over the merits of Burnside's arresting Vallandigham quickly spread around Ohio—a mob of Vallandigham supporters set fire to a newspaper that supported the war—but Burnside felt there was no turning back. Still without any authorization from his superiors in Washington, and realizing full well that delay might allow his decision to be countermanded from above, he chose a panel of eight officers from his staff and convened a court-martial for the next day.