SIGNIFICANCE: Emma Augusta Cunningham was acquitted of Dr. Harvey Burdell's murder, and nearly succeeded in her attempt to collect Burdell's estate on the basis of a forged marriage certificate and a fake pregnancy. Victorian attitudes toward women prevented the authorities from bringing Cunningham to justice.

Emma Augusta Hempstead was born in New York City in 1816. She grew up to be an attractive and intelligent woman. She was also ambitious to make her fortune, and did so through one of the few means open to women of that era: by marrying wealthy men.

She became Emma Cunningham in 1835 when she married George Cunningham, whose life insurance policy left her with $10,000 (a sizable amount in those days) when he died in 1852. Cunningham was a widow but still attractive and only in her 30s when she met Dr. Harvey Burdell, a New York dentist.

Burdell was born in Herkimer, New York, in 1811. He learned dentistry and moved to New York City, where his practice prospered and he accumulated a personal fortune estimated to exceed $100,000. Despite his wealth and professional standing, however, Burdell was far from being a pillar of the community. He was constantly being accused by his creditors of reneging on debts. In 1835, Burdell caused a scandal when on his wedding day he demanded $20,000 from the wealthy father of the bride-to-be to go through with the marriage. Furious, the bride's father refused, threw Burdell out of his house, and canceled the wedding.

In the early 1850s, Cunningham met Burdell, and in 1855 rented a suite of rooms at Burdell's 31 Bond Street mansion. Burdell's mansion was so large that Burdell not only lived there, he also ran his dental practice there, in addition to keeping several tenants such as Cunningham. Cunningham soon developed an intimate relationship not only with Burdell, but also with another tenant, John J. Eckel.

On the night of January 30, 1857, a neighbor heard a scream from Burdell's house that sounded like, "Murder!" The next morning, one of Burdell's servants discovered the doctor's body in his office, covered with multiple stab wounds. Police medical experts examined the body, and determined that Burdell had been stabbed 15 times with a knife wielded by a left-handed assailant. The police suspected that Cunningham, who was left-handed, had murdered Burdell with Eckel's help. The police arrested Cunningham for Burdell's murder, and she was imprisoned until trial. 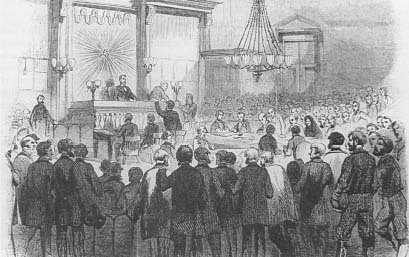 The crowded courtroom where the jury returned a verdict of not guilty,