SIGNIFICANCE: When the courts refused to convict slaves from the schooner Amistad after they killed their captors to free themselves, the decision was widely hailed as a victory for the cause of abolition.

By the 1830s, many countries were beginning to take steps to limit the age-old institution of slavery. Although slavery was still legal in the United States, it was illegal to bring new slaves into the country. Further, the abolitionist movement, which sought to do away with slavery altogether, was gaining more and more support. Great Britain was strongly in favor of abolition, and had used its naval power to pressure Spain, whose colonies were dominated by slave owners, to also make it illegal to bring new slaves into any Spanish possessions.

Spanish power in the New World was declining, however, and the government in Madrid lacked the power to enforce its will. The wealthy landowners in Cuba and elsewhere throughout the Spanish New World needed slaves to work their estates, and obeying the import restriction meant waiting for the children of existing slaves to mature. With slave owner demand strong and central authority weak, a flourishing illegal slave trade soon emerged. Slavers went to the west coast of Africa, captured healthy young black men and women, and brought them back to Cuba for sale. The colonial authorities did nothing to stop this trade. In 1839, slavers brought back a cargo of slaves from what is now Sierra Leone. Among the slaves was a young man they named Joseph Cinque.

In June of 1839, Jose Ruiz and Pedro Montes purchased 49 captured Africans, including Cinque, in Havana for their estates in the Cuban town of Puerto Principe. Ruiz and Montes put the slaves aboard the schooner Amistad, intending to sail from Havana up the Cuban coast to Puerto Principe. The Spanish crew taunted the ignorant slaves, telling them wild stories, such as that their new owners intended to kill and eat them when they arrived. On the night of July 1, Cinque led the blacks in a successful rebellion and seized control of the ship. The blacks killed several members of the crew in the struggle, but let Ruiz and Montes live. Cinque ordered Ruiz and Montes to take the ship to Sierra Leone so the blacks could go home.

The Spaniards sailed east for Africa by day, but secretly reversed course by night. For nearly two months, the Amistad meandered back and forth, but eventually winds and currents drove it north to the coast of the United States. On August 26, the U.S.S. Washington spotted the Amistad off the coast of New York, seized the ship, and brought it into New London, Connecticut. 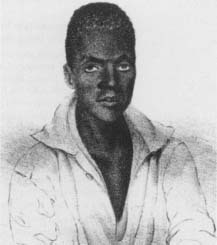 It was ruled that Joseph Cinque, leader of the Amistad rebellion, and his comrades "were born free, and … of right are free and not slaves."