Having demonstrated his power, Jefferson ultimately allowed most of the Adams appointees to take their offices. One of the appointees that Jefferson did not allow to take office, William Marbury, filed a petition with the Supreme Court December 16, 1801 requesting that the Supreme Court order Madison to deliver Marbury's commission. Marbury was joined by three other disappointed appointees, William Harper, Robert R. Hooe, and Dennis Ramsay. Of course, by now Marshall had been the chief justice for over nine months. Under the Judiciary Act of 1789, the Supreme Court had the power to issue the order Marbury requested, called a "writ of mandamus."

On December 18, 1801, Marshall ordered a hearing on Marbury's petition, to take place at the Court's next session, the 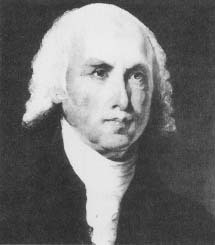 Portrait of Secretary of State James Madison, defendant in Marbury v. Madison, which established the principle of judicial review. February Term of 1803. The hearing began February 10, 1803. Charles Lee, a Federalist and former attorney general, represented Marbury and the others. Jefferson's attorney general, Levi Lincoln was present in court as a witness, but not as Madison's lawyer.

Lee argued that Madison, as secretary of state, was not only an official of the executive branch, bound to obey the president, but a public servant obligated to perform his duty and deliver Marbury's lawful commission. Therefore, the Court must exercise its authority under the Judiciary Act to issue a writ of mandamus against Madison. Attorney General Lincoln said practically nothing, except that the issue of the commissions was purely political and thus not subject to the judiciary.