The events which led to General Lee's court-martial occurred the following month. Lee continued to be critical of Washington's tactics, arguing that the American soldiers lacked the discipline and experience to successfully engage the British in conventional warfare, and that they should therefore rely on what would now be called guerilla operations. On June 26, 1778, Washington decided to send an advance guard to attack the rear of the British forces under Sir Henry Clinton at Monmouth, New Jersey. Lee disagreed with the plan and at first declined the command, but then changed his mind. He advanced with his detachment across rough terrain that had not been reconnoitered and made contact with the British rear, but Clinton reacted quickly and enveloped the American right flank. Lee then ordered a retreat. When this news was brought to George Washington, some five miles away, he rode quickly to Lee's detachment and accosted General Lee angrily. An altercation occurred between the two men. There is no entirely reliable account of what exactly was said, but this has been reported to be the only occasion on which Washington was heard to swear in public, and he is said to have called Lee a "damned poltroon" (a craven coward, or worthless wretch). After this Washington took command of the battlefield, regrouped the troops and counterattacked 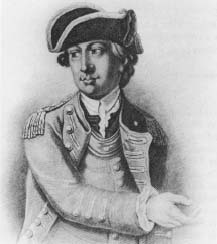 General Charles Lee the British. The fighting continued until dark, and the next morning the British troops were found to have retreated out of reach.