After four months in Shawnee captivity, Boone escaped suddenly during a wild turkey hunt. He covered the 160 miles to Boonesborough in four days. When he arrived at the settlement, he was met with suspicion. He looked like an Indian, and the men who had escaped from the Shawnee had told of his cooperation with the Shawnee. Nevertheless, he regained the settlers' trust, and he began to prepare Boonesborough for a siege. By August he suggested that the whites strike first by raiding a Shawnee town on Paint Creek just across the Ohio. Others pointed out that such a raid would draw off many of Boonesborough's defenders. But Boone convinced 30 men to come with him, although a third returned to Boonesborough the following day. After a brief skirmish with a small Shawnee war party, Boone and his group found the Indian town abandoned. This meant, they knew, that the Shawnee were all headed for Boonesborough, to which Boone and his men returned. 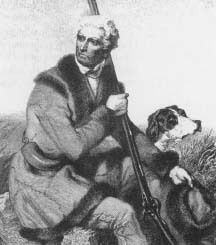 Facing nearly 500 warriors, Boone took a group beyond the settlement's walls and negotiated with Chief Blackfish. After a few days, Boone and his men agreed with the Shawnee that the Ohio River would be the boundary between white and Indian lands. Boone, suspecting treachery, had ordered sharpshooters to take aim secretly at the negotiators. As the Indians and whites began to shake hands on the deal, suddenly the Indians tried to grab the white leaders. The sharpshooters opened fire, the whites retreated into the settlement, and the Boonesborough siege began. After 11 days the Indians broke off the siege and retreated.