If a transcript of the trial of Captain Preston ever existed, it has disappeared. Summaries and notes of the testimony were made by various, sometimes artisan, individuals. The reconstruction from the available evidence is as follows.

The captain's trial began October 24, 1770, and was over October 30, 1770. It was the first criminal trial in Massachusetts to last longer than a day.

Samuel Quincy opened for the prosecution and called as its first witness Edward Garrick, the apprentice wig-maker whose taunts had ended with his being struck by Private Hugh White. After describing this incident, Garrick testified that he had seen soldiers in the streets carrying swords before Preston had led his men to the Custom House. The next witness, Thomas Marshall, supported that statement and added that Preston most certainly did have time to order his men to cease fire between the first and subsequent shots. 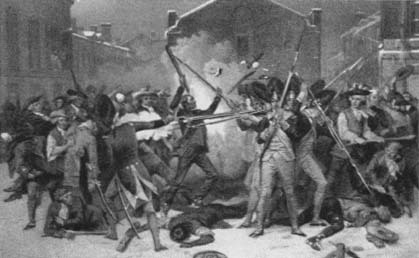 A fanciful engraving of the Boston Massacre.

Witnesses that followed also gave damning testimony. Peter Cunningham said that Preston had ordered his men to prime and load their muskets. Later, he qualified his statement by saying that the man who had ordered the troops to fire was definitely an officer by reason of the way he was dressed. Witnesses William Wyatt and John Cox both insisted that Preston had given the order to fire.

But on the following day, the Crown's testimony floundered. Witness Theodore Bliss said Preston had been standing in front of the guns. Bliss heard someone shouting "Fire" but did not think it was the captain. Henry Knox testified that the crowd was shouting, "Fire, damn your blood, fire." And Benjamin Burdick said he heard the word "Fire" come from behind the men.

The Crown regained some ground with witness Daniel Calef, who unequivocally stated that he had "looked the officer in the face when he gave the word" to fire. The next witness, Robert Goddard, also stated firmly that Preston, standing behind his men, had given the order to fire.

Samuel Quincy did not close the Crown's case with a summation of the evidence. Instead, he quoted from a few legal treatises:

Not such killing only as proceeds from premeditated hatred or revenge against the person killed, but also in many other cases, such as is accompanied with those circumstances that shew the heart to be perversely wicked, is adjudged to be of malice prepense, and consequently murder.

The first three witnesses for the defense testified to the threats uttered against the soldiers by those in the street. According to one, Edward Hill, after the firing, he saw Preston push up a musket and say, "Fire no more. You have done mischief enough."

On the following day, a string of witnesses vividly described the confusion and anger that reigned March 5. The first witness for the defense, John Edwards, stated firmly that it was the corporal, William Wemms, who had given the men the order to prime and load their muskets. Another, Joseph Hilyer, said, "The soldiers seemed to act from pure nature, … I mean they acted and fired by themselves."