The Suit, Suggestions For Further Reading

SIGNIFICANCE: The case provided a forum for challenging the limits of England's power to control American colonial affairs.

The Parsons' Cause began as an argument over a piece of financial legislation and ended with an impassioned speech on a theory of government. That speech was one of the first signs of the schism occurring between England and her American colonies.

Because the Anglican Church was the established church of the colony of Virginia, its clergy were supported by taxes. By a 1748 statute, the salary of a parson was set at 16,000 pounds of tobacco a year. (Tobacco was a common form of tender during the colonial period.) In 1755 and again in 1758, due to shortages of tobacco brought on by drought, laws were enacted allowing tobacco obligations to be fulfilled with Virginia's paper money. Paper money, which generally depreciated in value, was blessed by debtors and loathed by creditors.

The 1758 law, the Two Penny Act, a temporary, one-year measure, allowed the ministers' salaries to be paid in currency at a fixed rate of twopence per pound of tobacco. The prevailing inflated market rate at the time was running at fourpence to sixpence per pound. Once depreciation was factored in, a clergyman was receiving about one-third of his normal, stipulated salary. The colony's council approved and, with the House of Burgesses, convinced Francis Fauquier, the royal governor, to allow the act to go into effect.

Virginia's revenue measures were supposed to be approved by the Privy Council back in London before being implemented. But Fauquier, in a letter to Great Britain's Board of Trade, argued that, given the economic need and the short-term duration of the measure, suspending the act until the Council could review was tantamount to rejecting it and, thus, eliminating all economic relief. Such a decision would repudiate the almost unanimous economic wisdom of experienced local legislators and to ignore the 1755 precedent for which the previous governor "incurred no Censure for having pass'd it."

The clergy objected. They argued that they should reap the benefit of high tobacco prices since they had had to accept whatever their tobacco would sell for when the price was low. But the Privy Council would probably have let the measure stand had it not been for the persistence of the Reverend John Camm of York County. Camm led a group of Anglican ministers determined to see the Two Penny Act nullified. When a war of pamphlets and lawsuits availed them nothing, Camm sailed for England. 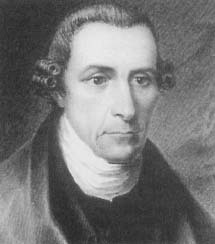 Patrick Henry, above, served as counsel for the defense in the Parson's Cause Trial, despite the fact that his father was the presiding judge.

In England he enlisted the help of the Archbishop of Canterbury and the Bishop of London. Camm argued that the Two Penny Act was a manifestation of the deliberate erosion of royal and Anglican authority in Virginia. Camm's narrow-minded focus on his own list of grievances ignored the act's purpose as a financial relief measure. (Some historians have questioned the need for the act and there were those in Virginia who were happy to see the ministers take a financial blow. But there is little evidence that the House of Burgesses deliberately set out to penalize the clergy.) The king and his council, on the recommendation of the Board of Trade, disallowed the measure and its predecessors.

Since the Two Penny Act of 1758 already had expired, the repeal of the law would have been moot had not several clergymen sued for back pay. Two cases were rejected on the grounds that the act was valid until it was actually disallowed by the Privy Council. One court awarded a parson double his salary in damages. But it was the case filed by Reverend James Maury of Louisa County that turned out to be the most significant.