SIGNIFICANCE: Quaker Mary Dyer's conviction and execution for practicing her faith in a manner other than the one approved by Massachusetts' colonial government was indicative of the draconian measures the puritan leaders of the colony were prepared to use to insure total theological conformity.

In 1638, when Anne Hutchinson was excommunicated from the Church of Boston, Mary Dyer walked to Hutchinson's side and offered her hand in solidarity. Accounts of Hutchinson's trials in the Massachusetts Bay Colony appear in every child's first American history text, while Mary Dyer's own trials—22 years later and with far more drastic consequences for the accused—are rarely examined.

The Puritan officials of the Massachusetts Bay Colony had struggled since the colony's founding to eliminate dissenters. In 1658, they found Quakers, or members of the Society of Friends, particularly alarming: The Records of the Governor states emphatically that "The doctrine of this sect of people … tends to overthrow the whole gospell [sic] & the very vitalls [sic] of Christianitie …" On October 19, 1558, the colony passed a law banishing Quakers "on pajne [sic] of death."

Two Quakers, William Robinson and Marmaduke Stephenson, were imprisoned in Boston in 1659; that summer, Dyer visited them and was thrown into prison as well. All three were ordered banished and threatened with execution should they ever return to the colony. They were released on September 12, 1659, but returned within a few weeks to "look [the] bloody laws in the face."

The three were thrown into jail for, as the governor's records describe it, "theire rebellion, sedition, & presumptuous obtruding themselves upon us," and "as underminers of this government." They stood trial before the General Court on October 19, 1659. "[B]rought to the barre," they "acknowledged themselves to be the persons banished" and earlier "convicted for Quakers." Governor John Endecott declared the sentence to each of them in turn, using the same words: "You shall go from hence to the place from whence you came [jail], & from thence to the place of execution, & there hang till you be dead." 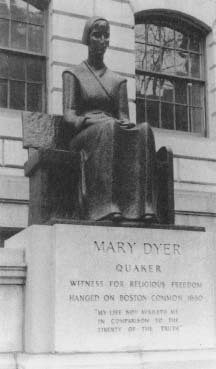 Statue of Mary Dyer in Boston.

When Dyer heard her sentence, she said, "The will of the Lord be done." Her husband, William Dyer, accepted the situation with less equanimity. On August 30, 1659, he had written to the "Court … assembled at Boston" to object to the restriction of his wife's religious liberty. He likened the members of the General Court to the "Popish inquisitors" of the 13th century, since they served as "a judge and accuser both." He complained bitterly that the Puritans, who had left England to escape persecution, now persecuted others: "[S]urely you or some of you, if ever you had the courage to looke a bishop in the face, cannot but remember that the 1. 2 or third word from them was, You are a Puritane are you not, & is it not so in N. England, the magistracy having … assumed a coercive power of conscience, the first or next word After appearance is You are a Quaker."

Governor Thomas Temple of Nova Scotia, Governor John Winthrop, Jr., of Connecticut, and Dyer's son William added their objections, and Dyer received a dramatic suspension of her sentence. With Robinson and Stephenson, she was escorted by drum-beating soldiers to "the place of execution, & there [made] to stand upon the gallowes, with a rope about her necke." Robinson and Stephenson were both hanged but Dyer, to her surprise, was granted "liberty for forty eight howers … to depart out of this jurisdiction, after which time, being found therein, she is forthwith to be executed."

She remained outside the colony for only seven months before returning. Before Governor Endecott and the General Court on May 31, 1660, "she acknowledged herself to be Mary Dyer,… denied our lawe, [and said she] came to bear witness against it." Then "The whole court mett together voted, that the said Mary Dyer, for her rebelliously returning to this jurisdiction … shall … according to the sentence of the General Court in October last, be put to death."

Mary Dyer was hanged on June 1, 1660. In 1959, the Massachusetts General Court ordered a seven-foot statue of Dyer—which bears the inscription "Witness for Religious Freedom"—to be placed on the lawn of the Boston State House.