SIGNIFICANCE: Anne Hutchinson was the defendant in the most famous of the trials intended to squelch religious dissent in the Massachusetts Bay Colony.

The Massachusetts Bay Colony had been founded so that the Puritans might perfectly practice their own faith. Religious liberty for others—a concept Americans would later take for granted—was not part of the Puritans' plan. Instead, founding Governor John Winthrop envisioned a model "Citty [sic] upon a hill," an example of Christian unity and order. Not incidentally, women were expected to play a submissive and supporting role in this society.

Anne Hutchinson, a skilled midwife and herbal healer with her own interpretation of Puritan doctrine, challenged the leaders of this "wilderness theocracy," as Barbara Ritter Dailey describes it. She arrived in the colony in 1634 and began holding religious meetings in her home. She quickly drew crowds of 60 to 80 men and women on a weekly basis. An alarmed assembly of church elders agreed that "women might meet [some few together] to pray and edify one another" but, without naming Hutchinson, denounced "one woman … [who] took upon her the whole exercise … [as] disorderly, and without rule."

Hutchinson continued to outline her views. Puritan doctrine emphasized the performance of "good works," which might be interpreted as evidence, or justification, that an individual had been elected for salvation. Hutchinson's favorite minister, John Cotton, stressed a "covenant of grace"—the idea that one's own spiritual consciousness of God's election might also be justification. Hutchinson expanded this idea to include an in-dwelling Holy Ghost whose guidance replaced the self-will of the saved. She then denounced all of the colony's ministers except Cotton and her brother-in-law, John Wheelwright, for preaching only the "Covenant of Works." 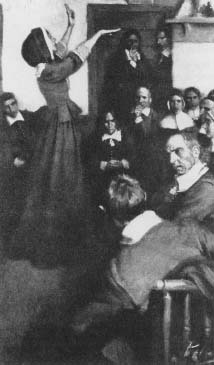