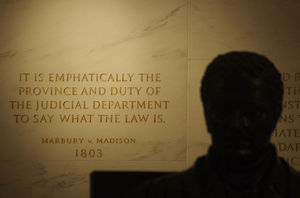 That Madison had illegally refused to deliver judicial commissions to their rightful recipients.

Justices for the Court

None (Alfred Moore did not participate)

Plaintiffs could not force Madison to deliver the commissions because the Judiciary Act of 1789 was unconstitutional.