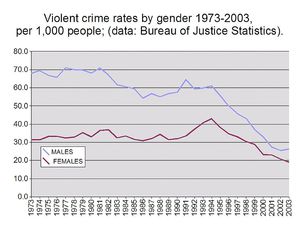 Gender is the single best predictor of criminal behavior: men commit more crime, and women commit less. This distinction holds throughout history, for all societies, for all groups, and for nearly every crime category. The universality of this fact is really quite remarkable, even though many tend to take it for granted.

Most efforts to understand crime have focused on male crime, since men have greater involvement in criminal behavior. Yet it is equally important to understand female crime. For example, learning why women commit less crime than men can help illuminate the underlying causes of crime and how it might better be controlled.

This discussion of gender and crime first reviews both current and historical information on the rates and patterns of female crime in relation to male crime. The discussion is followed by a consideration of theoretical explanations of female crime and gender differences in crime. Finally, the authors briefly outline a "gendered" approach to understanding female crime that takes into account the influence of gender differences in norms, in socialization, in social control, and in criminal opportunities, as well as psychological and physiological differences between men and women.

Comparisons of criminal behavior between different groups—such as men and women—use data from a variety of sources. One of the most widely used sources is arrest data from the U.S. Federal Bureau of Investigation's Uniform Crime Reports (UCR), collected from the nation's law enforcement agencies and tabulated by the Federal Bureau of Investigation (F.B.I.). Other sources include surveys of victimization experiences, such as the U.S. Bureau of Justice Statistics' National Crime Vicitimization Survey (NCVS); surveys of self-reported offending behavior, such as the National Youth Survey (Elliot and Ageton); and case studies based on autobiographical accounts or interviews with and observation of individual offenders and gangs. The discussion starts with a consideration of what can be learned from arrest data, and then briefly touches on the insights to be gained from other sources. Any comparison of male and female criminality must acknowledge important similarities as well as differences.