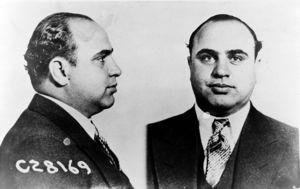 Prohibition officially became law on January 17, 1920, as the states ratified (voted approval) of the Eighteenth Amendment to the U.S Constitution, banning the manufacture, sale, and distribution of alcoholic beverages in the United States. Those in favor of Prohibition predicted its enforcement would be easy and inexpensive. It soon became apparent, however, that Americans were not prepared to give up alcohol. Beating Prohibition became a national pastime.

Alphonse "Al" Capone, whose brief career as a Chicago mob boss made him into a legendary character, generated an income of more than $100 million per year.

Gangs who had limited their activities to gambling and thievery before 1920 transformed into organized groups of "bootleggers," individuals who illegally brought liquor into the country and sold it to thirsty Americans. Bootlegging gangsters became millionaires. Prominent among them was Alphonse "Al" Capone, whose brief career as a Chicago mob boss made him into a legendary character. His income was estimated at over $100 million per year.

Near the end of the 1920s, gangs had become so organized they held a national convention in Cleveland, Ohio, on December 5, 1928. Twenty-three bosses, all of Sicilian families, gathered from New York City, Chicago, Detroit, St. Louis, Tampa, and Philadelphia. Capone could not attend because he was not Sicilian, but he sent representatives.

Although mutually suspicious of one another, they discussed common interests, problems, and explored the idea of establishing a nationwide crime syndicate. A syndicate is an association of individuals or groups who agree to carry out certain activities. In another meeting held in May 1929 in Atlantic City, New Jersey, crime bosses from around the country divided up the United States into territories. Next they established a national "Commission," made up of one representative from each of the country's nine territories.

By September 1931, Charles "Lucky" Luciano and his allies—which included Jewish crime boss Meyer Lansky—were at the top of the New York crime scene. They were the victors of the Castellammarse War, a New York City gangster war between old line Italian and Sicilian Mafia bosses who had migrated to the United States in the late nineteenth and early twentieth centuries.

The older bosses focused on settling old vendettas (bitter prolonged feuds), not on making money. The winning Luciano-Lansky faction concentrated entirely on making money and killed anyone who got in their way. Luciano was also responsible for energizing the nine-member commission. This change in direction and the activation of the commission is referred to as the Americanization of the Mafia.

New York City was divided among five crime families with approximately nineteen more family units around the country. The five New York City families became famous; each was named after their Godfather. The legendary families were the Bonnano, Columbo, Gambino, Genovese, and Lucchese.

When the highly profitable bootlegging period ended in 1933 with the repeal of the Eighteenth Amendment, organized crime syndicates (groups) focused on other criminal activities including gambling, loan sharking (charging very high interest rates on loans, usually very hard to pay back), prostitution, and drug distribution, a natural extension of bootlegging. Labor racketeering was another popular criminal activity. Gangsters worked their way into positions of power in a labor union and then stole from the union's retirement and health funds.

Keeping a relatively low profile, the national organized crime syndicate received little interference from the FBI, headed by J. Edgar Hoover (1895–1972). Fearing a poor showing against the underworld, Hoover chose not to battle organized crime. Hoover insisted the mob did not exist in the United States. Organized crime grew and prospered across the country.

Before their arrest, Charles "Lucky" Luciano and his allies were at the top of the New York crime scene.


In 1951 the Kefauver Committee of the U.S. Senate conducted hearings on crime and concluded an organized Mafia did indeed operate nationwide. The Kefauver Committee was a special congressional committee created by Congress to investigate organized crime in America, including racketeering (obtaining money through illegal activities). In 1957 the New York State Police accidentally uncovered a large meeting of sixty organized crime bosses at a rural home in Apalachin, New York. As police moved in the bosses ran into the New York countryside to escape. After this incident, there was no denying the existence of an American Mafia.

The U.S. Senate Subcommittee on Investigations gained considerable information about the mob from a defendant named Joseph Valachi in 1963. A member of New York City's Genovese family, Valachi was the first Mafia insider to give major information about the workings of the Mafia. For the first time, the American public learned about the commission and the internal structure of crime families in New York and across the nation.

During the 1960s, under the direction of U.S. Attorney General Robert Kennedy (1925–1968), the U.S. Department of Justice began a major effort to arrest and prosecute crime family members. At the time, government reports listed twenty-four crime families with five thousand members of Italian and Sicilian ancestry. About this time the American Mafia families became known as the Cosa Nostra. Cosa Nostra means "our thing" in Italian.

Throughout the 1970s crime families warred with each other for power. Members of one family would assassinate another family's boss; then the family of the murdered boss would seek revenge with another killing and so on. Murders were also often committed to prevent a member from testifying in a trial.

Salvatore "Sammy the Bull" Gravano broke the mob's code of silence and testified against his boss, John Gotti. Gotti, seen here, was sentenced to life in prison.


The first RICO convictions of mob bosses or heads of families came in 1980. Numerous other gangsters were convicted under RICO for crimes ranging from operating illegal garbage collection associations to loan sharking to murder. In 1985 the bosses of all five Cosa Nostra crime families in New York City received prison terms of at least one hundred years, dealing a major blow to organized crime.

In 1992 Salvatore "Sammy the Bull" Gravano (1945–) broke the mob's code of silence, like Joseph Valachi. Gravano, a high-ranking member of the Gambino crime family, testified against his boss, John Gotti (1940–2002). Gotti was sentenced to life in prison. Gotti's successor was his brother Peter, whose legal business was in trash collecting. Peter Gotti ran the Gambino family, which received monthly cash payments from violent thugs who controlled the Brooklyn waterfront where garbage was collected and transported to landfills. Peter, at age sixty-four, was sentenced to more than nine years in prison in April 2004 on charges related to waterfront payoffs.

Three decades of arrests and convictions of Cosa Nostra family members decreased the American mob's power. RICO proved to be a powerful tool for convicting organized crime members and resulted in long prison sentences. The code of silence, to never testify against another crime member, had been broken. Those who testified received much shorter prison sentences than if they had not cooperated.

Government enforcement had sent many high-ranking mob leaders to prison. A life of crime was no longer as attractive and a considerable number of young people from Cosa Nostra families chose to attend universities and pursue lawful careers. A greater number of crime family recruits came from uneducated kids who had neither leadership skills nor the loyalty of past members. The face of organized crime began to significantly change. New criminal gangs of black Americans, Hispanics, Asians, Chinese, Russians, and South Americans competed with the traditional American Mafia. Motorcycle, or "biker," gangs became a major rival of the mob.