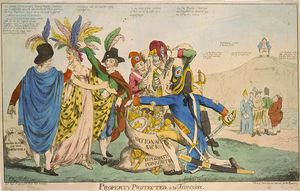 The XYZ Affair was a diplomatic incident that almost led to war between the United States and France. The scandal inflamed U.S. public opinion and led to the passage of the ALIEN AND SEDITION ACTS of 1798 (1 Stat. 570, 596). Though the affair caused an unofficial naval war, the two countries were able to negotiate their differences and end their conflict in 1800.

The affair took place during one of the Napoleonic wars between France and Great Britain. The French regarded the United States as a hostile nation, particularly after the signing of Jay's Treaty in 1794. This treaty settled some of the problems that continued to cause friction between the United States and Great Britain after the peace treaty of 1783 that granted the colonies independence. Consequently, President JOHN ADAMS appointed Charles Pinckney minister to France in 1796 in an attempt to ease French-U.S. relations.

After Charles Talleyrand, the French foreign minister, refused to recognize Pinckney, Adams appointed a commission to France, consisting of Pinckney, JOHN MARSHALL, and Elbridge Gerry. Before official negotiations on a treaty to establish peaceful relations and normalize trade could occur, Talleyrand sent three French agents to meet with the commission members. The agents suggested that Talleyrand would agree to the treaty if he received from the United States a $250,000 bribe and France received a $10 million loan. The commission refused, with Pinckney quoted as saying, "No! No! Not a sixpence!"

Outraged, the commission sent a report to Adams, who inserted the letters X, Y, and Z in place of the agents' names and forwarded the report to Congress. Congress and the public were angered at the attempted blackmail. An undeclared naval war took place between the two nations between 1798 and 1800. Anticipating a declared war with France, Congress enacted the Alien and Sedition Acts. These internal security laws were aimed at French and Irish immigrants, who were thought to be supportive of France. The acts lengthened the period of naturalization for ALIENS, authorized the president to expel any alien considered dangerous, permitted the detention of subjects of an enemy nation, and limited FREEDOM OF THE PRESS.

Talleyrand, unwilling to risk a declared war with the United States, sought an end to the dispute. The next U.S. delegation sent to France was treated with appropriate respect, and the Treaty of Morfontaine, which restored normal relations between France and the United States, was signed in 1800.

Vaughan, Harold Cecil. 1972. The XYZ Affair, 1797–98: The Diplomacy of the Adams Administration and an Undeclared War with France. New York: F. Watts.