The Walnut Street Prison was a pioneering effort in prison reform. Originally built as a conventional jail just before the American Revolution, it was expanded in 1790 and hailed as a model of enlightened thinking about criminals. The prison, in fact, was known as a "penitentiary" (from the Latin word for remorse). It was designed to provide a severe environment that left inmates much time for reflection, but it was also designed to be cleaner and safer than past prisons. The Walnut Street Prison was one of the forerunners of an entire school of thought on prison construction and reform.

The prison was built on Walnut Street, in Philadelphia, as a city jail in 1773 to alleviate overcrowding in the existing city jail. Although designed by ROBERT SMITH, Pennsylvania's most prominent architect, the building was a typical U-shaped building, designed to hold groups of prisoners in large rooms. By and large the role of prisons was to incarcerate criminals. There was little regard for their physical well-being, nor were there any attempts to rehabilitate them. Prisons were overcrowded and dirty, and inmates attacked each other regularly. Those who served their sentences came out of prison probably more inclined toward a criminal life than they were before their incarceration.

It was the Quakers of Philadelphia who came up with the concept for what they called a penitentiary—a place where prisoners could reflect on their crime and become truly sorry for what they had done. The Quakers believed that through reflection and repentance, inmates would give up crime and leave prison rehabilitated. Shortly after the American Revolution, a group of Quakers formed the Philadelphia Society for Alleviating the Miseries of Public Prisons, whose goal was made clear in its name. (Later the group became known as the Pennsylvania Prison Society.) In the years after the Revolution this group worked to encourage prison reform, and its efforts finally paid off in 1790 when the Walnut Street Jail became the first state penitentiary in the country.

The main addition to the Walnut Street complex was a new cellblock called the "Penitentiary House." Built in the courtyard of the existing structure, it included a series of small cells designed to hold individual prisoners. The cells and the corridors connecting them were designed to prevent prisoners from communicating with each other. Windows were high up (the cells had nine-foot high ceilings) and grated and louvered to prevent prisoners from looking onto the street. Each cell had a mattress, a water tap, and a privy pipe. Inmates were confined to their cells for the duration of their confinement. The only person they saw was the guard and then only briefly once a day. They were sometimes allowed to read in their cells, but for the most part they sat in solitude. The Quakers saw this solitary confinement not as a punishment but as a time for reflection and remorse. That was the reason the inmates were not put to work. Labor, said penitentiary proponents, would preoccupy the inmates and keep them from reflecting on their crimes.

The Walnut Street Prison became in part the model for what became known as the "Pennsylvania System" of prison design and philosophy. Other prisons built on the Pennsylvania model included a prison in Pittsburgh in 1821, the Eastern State Penitentiary (Cherry Hill) in eastern Philadelphia in 1836, and the Trenton State Prison in New Jersey the same year. The concepts of solitary confinement and repentance were key components of prison life at these institutions, although some Pennsylvania System prisons did introduce labor to the inmates. Visitors from overseas who were interested in prison reform visited Walnut Street, Eastern State, and similar prisons to see how they operated and to gain knowledge about prison reform strategies.

Meanwhile, in 1821 a prison was opened in the small upstate New York town of Auburn. That prison, which relied on individual cellblock architecture, required inmates to work 10 hours per day, six days per week. A number of prison reformers believed that by making the inmates work in an atmosphere free of corruption or criminal behavior, they would build new sets of values. The work would rehabilitate them because it would give them a sense of purpose, discipline, and order. This system became known as the "Auburn System," and it was followed in 1826 with the opening of Sing Sing prison on the banks of the Hudson River.

As for Walnut Street, its success was short-lived despite the good intentions of the Quakers. The practical matter of housing prisoners became more pressing than the desire among prison officials to rehabilitate the inmates. Walnut Street became overcrowded and dirty, and there was no sign that isolated prisoners were being rehabilitated through solitude. By the 1830s the prison had outlived its usefulness, and

In 1790, Philadelphia's Walnut Street Jail was expanded to alleviate overcrowding. The result was the first U.S. penitentiary, the Walnut Street Prison, shown in the background of this 1799 engraving by William Russell Birch.

it was closed in 1835. Later it was razed, and a library now stands on the site. 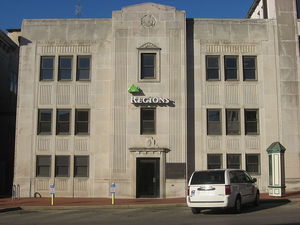